This game features Alexei Shirov, former world #2 from Latvia and notoriously aggressive attacking player, against Viswanathan Anand, the world champion at the time this was played. 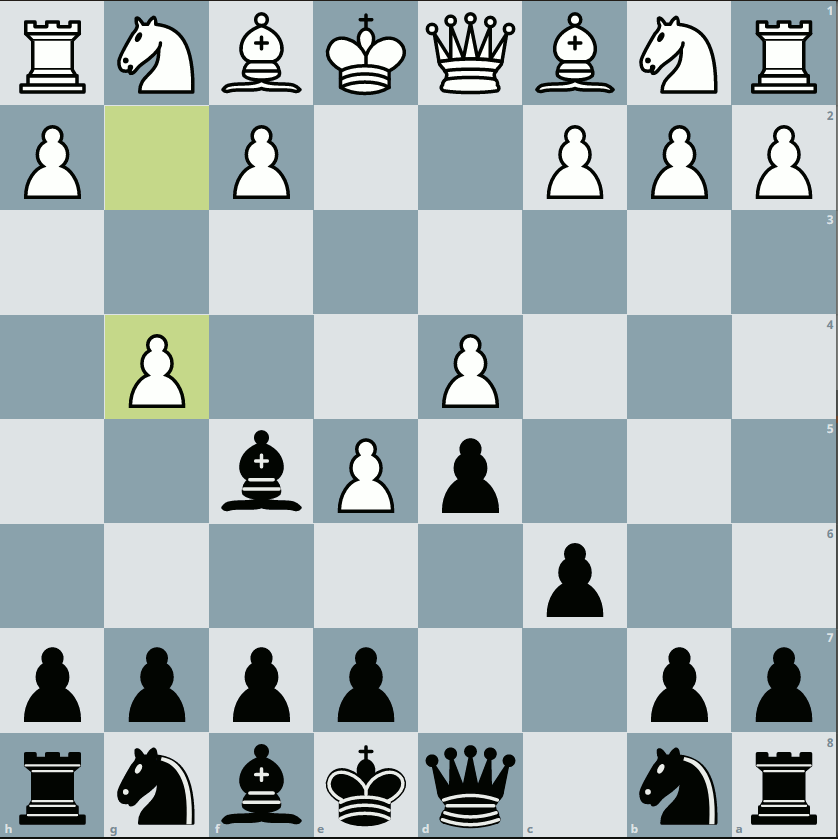 This aggressive move defines the Bayonet Attack. No surprise that Shirov chooses one of the most aggressive responses. This move is not common at the master level. It is the 9th most common response to Bf5 in my database with only 164 master games. The most common move by far is the solid response Nf3 which typically results in a more solid game.

Surprisingly, though, white has done quite well with 4. g4 with at 42% win rate and 23% draw. The computer does not like this variation much, but that is typical of aggressive openings that strong attacking players use to create practical chances for wins in otherwise drawish positions.

The most popular choice among GMs. 4. … Be4 is a popular alternative to provoke f3 from white.

By far the most popular choice, seeking to blow up the center early. This gives white the highest winning chances, but the engine thinks that this move completely gives up white’s opening advantage already.

More solid choices are Nc3 and Be3, where a more position game will take place.

A strange looking move that completely blocks in the bishop, but by far the most common. If white takes the d5 pawn, he allows black to recapture with the e6 pawn, and his bishop is looking great again. If white never takes the pawn, it’s not entirely clear how he plans to open things up in the center.

Ne7 is more typical here, but Anand wants to strike at the center immediately to open up his queenside pieces. 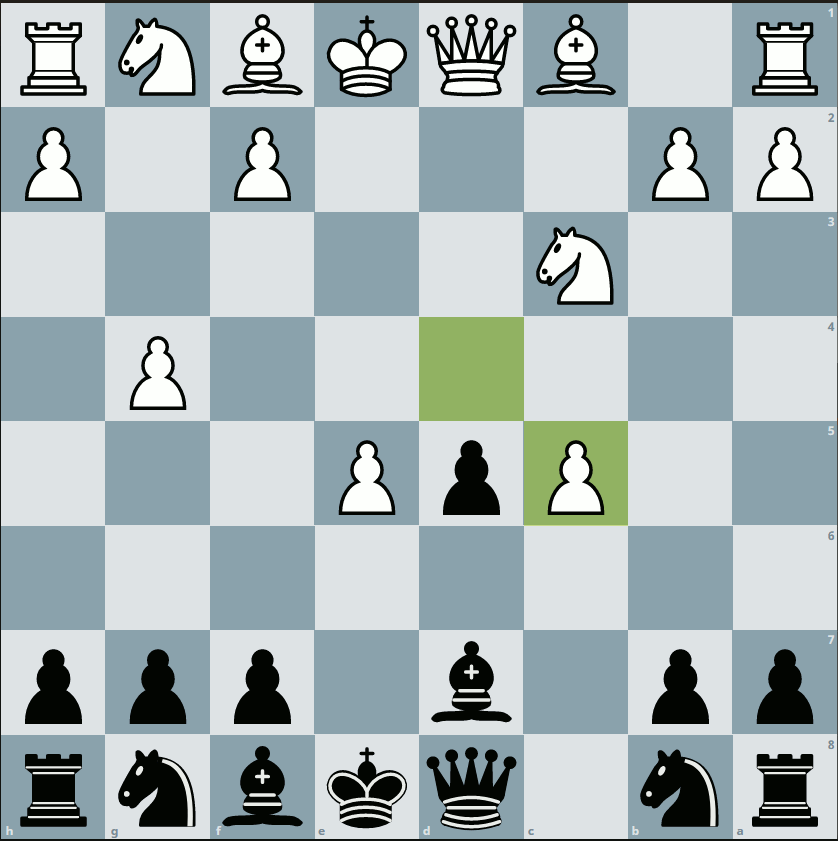 A questionable but dynamic move which gives up some central control and allows black to develop his dark-squared bishop. Better was the solid Be3.

Note that white cannot take the d5 pawn with Nxd5 because it runs into Bc6, double attacking the knight and pinning the white knight to the unprotected h1 rook.

White can get away with the most direct 9. Qxd5 here. It is likely the best move, but things get very complicated after 9. … Qb6! 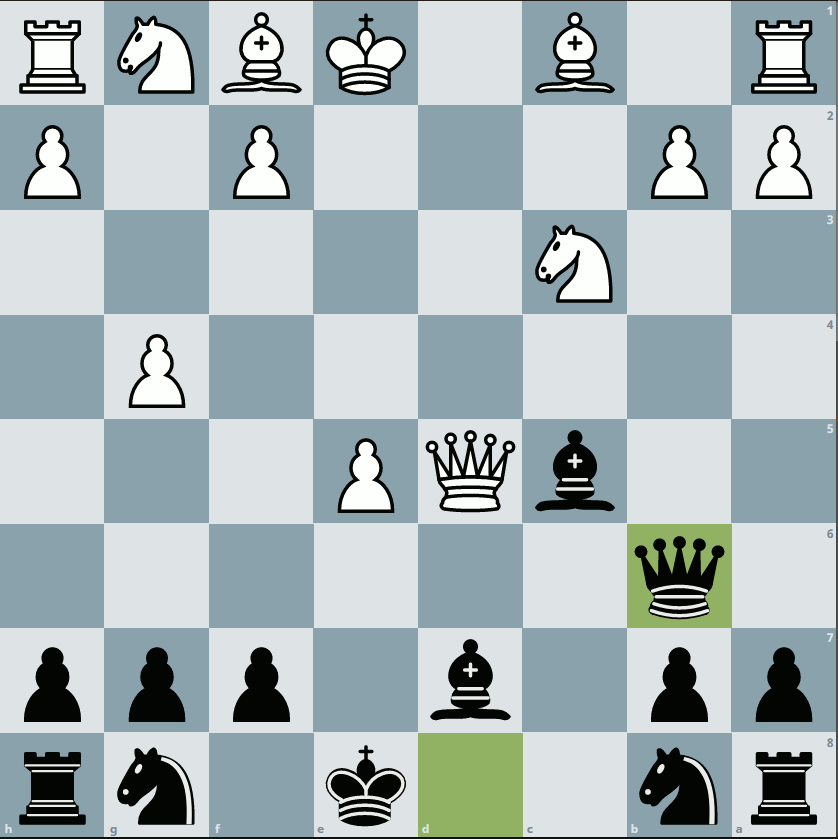 Shirov is already slightly worse by move 8, so it may have served him well to complicate the game directly with 9.Qxd5, but either way it is hard to see how white can apply pressure as quickly as black. 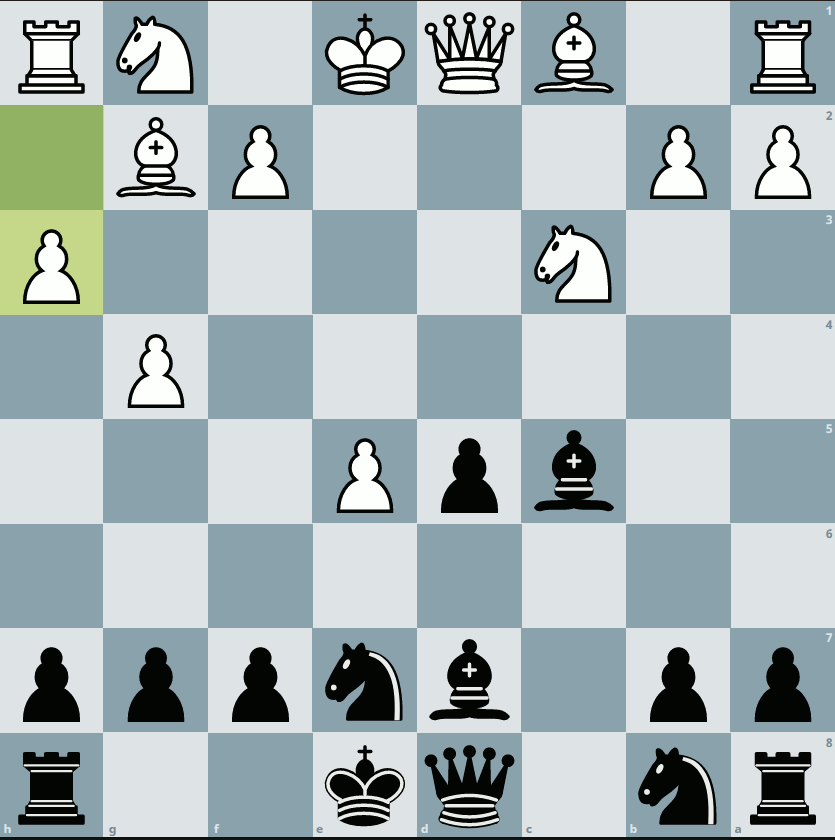 A strange move, and I’m not sure that I understand the point. Shirov reinforces his pawn on g4 and allows his bishop more mobility, but the g4 pawn was already guarded by his queen on d1. The move looks very slow with his king still in the center and a knight sitting on g1. It is possible that he wanted to develop his g1 knight to e2 while keeping his pawn protected, but again it just seems like a very slow way to develop in such an open position.

Either 10. Nh3 or 10. Nge2 just offering up the g4 pawn to catch up in development would have been far better choices in this position. 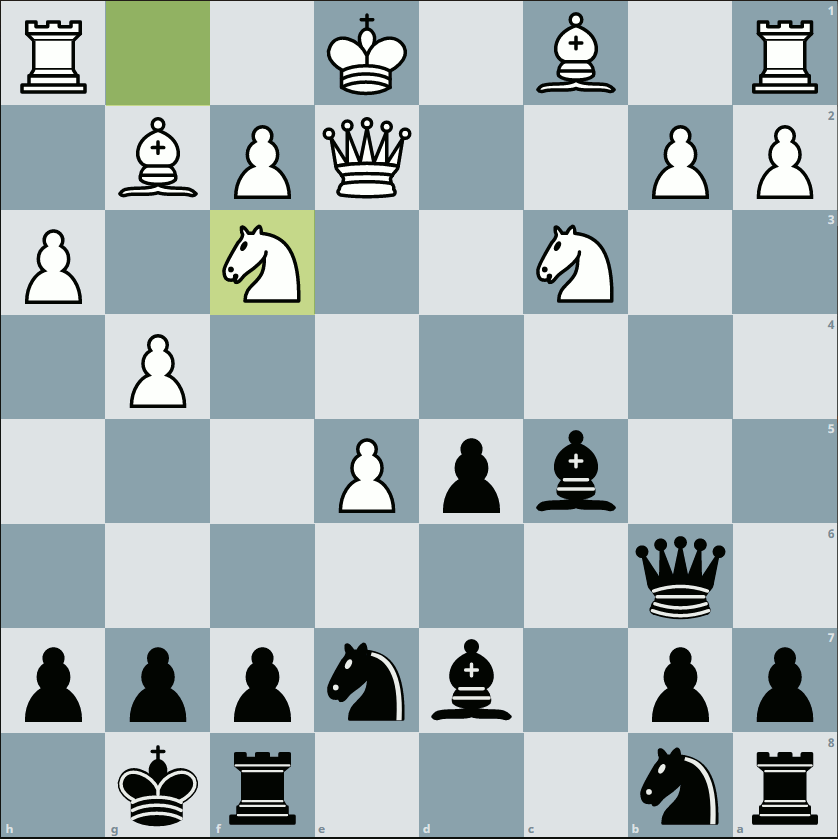 Incredibly, this natural-looking move loses the game immediately. Despite equal material, Stockfish evaluates this position as -3.2(Depth=38)! It’s hard to find a good alternative move for white at this point, though. Presumably, white needs to castle at some point, and there is no other available square for the knight. The “better” alternative seems to be developing the dark-squared bishop to g5 or starting with some pawn advances on the queenside with a3 or a4. These are improvements according to the computer, but they are not human-looking moves since they don’t solve the pressing kingside development issue.

It’s clear at this point that Shirov has gone completely wrong right out of the opening, and Anand takes full advantage by finding the best move. 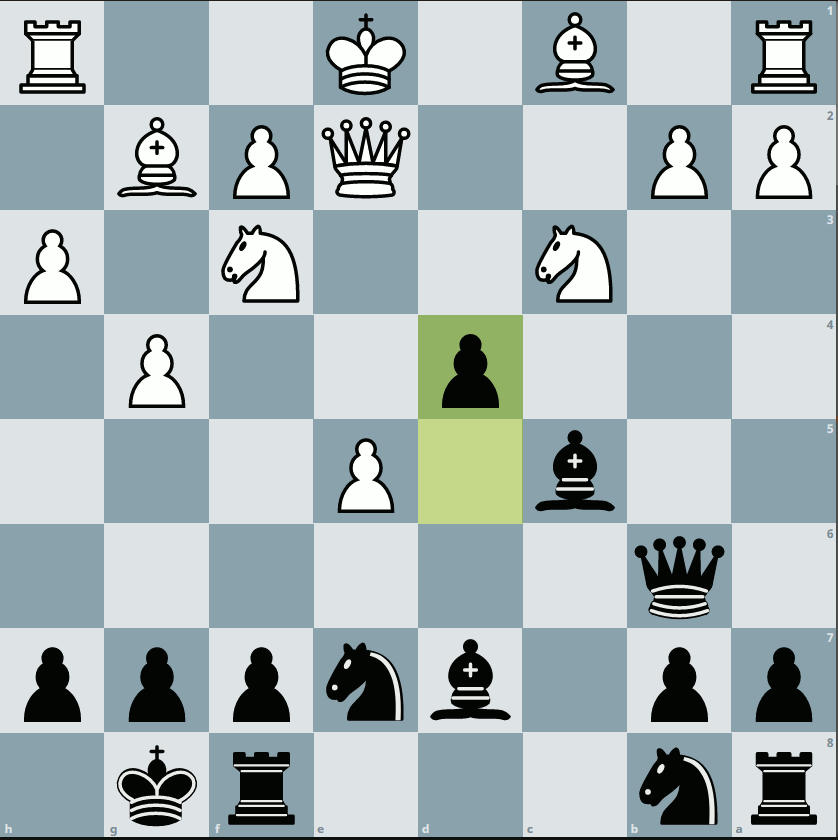 Anand blasts open the position before white has the opportunity to castle. 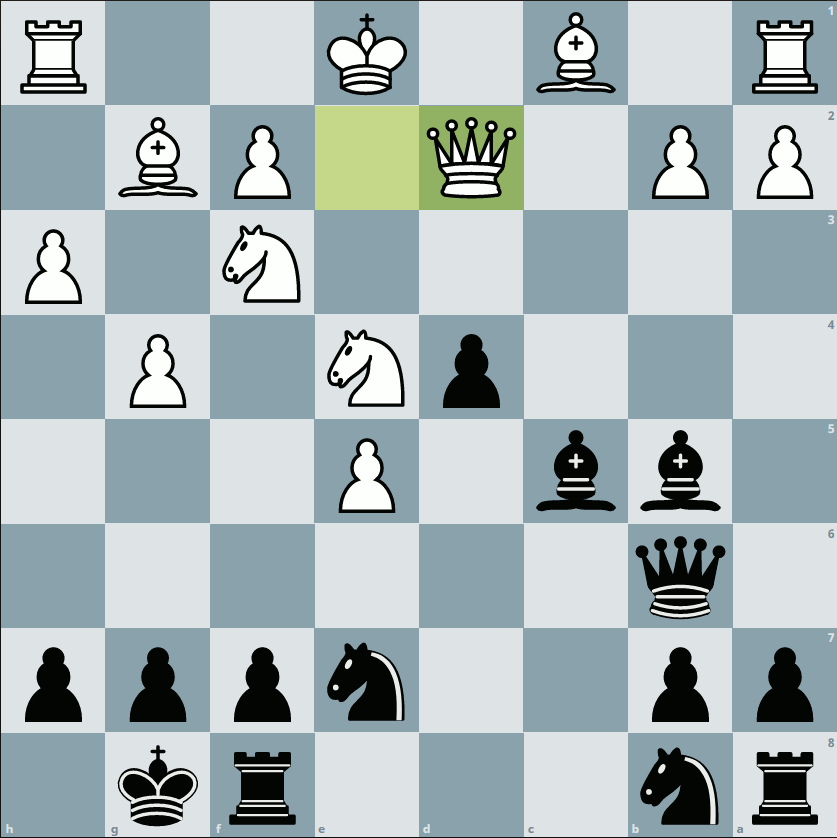 Qc2 and Qd1 were better choices, but it would not have made a difference. Anand is already too far ahead and pushes ahead with the quiet..

Simply developing the knight and protecting the d4 pawn. White can never castle because of black’s light-squared bishop on the a6-f1 diagonal, and white’s queenside pieces are blocked in indefinitely.

White starts the process of freeing his queenside, but it’s just too slow.

White finally frees up his queenside, but… 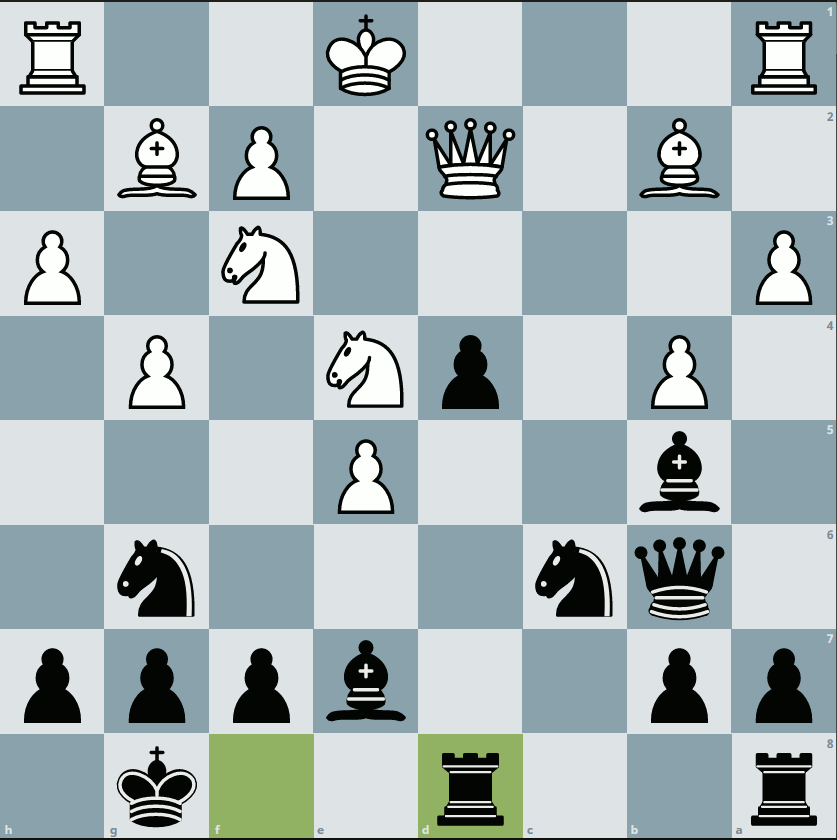 We are on move 17 and material is even. How is this so incredibly bad for white?

To start, try to suggest a move for white. It’s hard to come up with much. He can either play Rd1 or castle queenside to put more pressure on the d4 pawn, but does he really want that pawn? White’s king is wide open even if he castles queenside, and black can immediately follow up with a5 exposing white’s king further. There is nowhere for white’s king to hide.

Black’s king, on the other hand, is completely safe. Black can freely take the pawn on e5 whenever he wants, and if the knights are traded, black threatens to get a knight into the protected d3 square where some nasty tactics will shortly follow.

After black moves his other rook to c1, all his pieces will be developed and actively involved in the assault on white’s king. Even if black sits around doing nothing for a while, it’s not clear how white will ever finish development at this point. White has no plan and no hope, so he resigns.

This game provides a great example of what can go wrong if white gets too aggressive against the Caro-Kann without playing accurately. There is nothing wrong at all with the aggressive Bayonet attack variation that Shirov played, but you have to play accurately if you don’t want it to backfire.

The Caro is generally thought of as a relatively passive opening choice for black, but it’s really only passive when white decides to make it so. White is typically the one that gets to decide whether the opening evolves into a slow, positional game or a tactical, dynamic one like the one above. Whatever white chooses, the asymmetrical nature of the Caro-Kann gives black plenty of chances to create positional imbalances which can lead to interesting games.